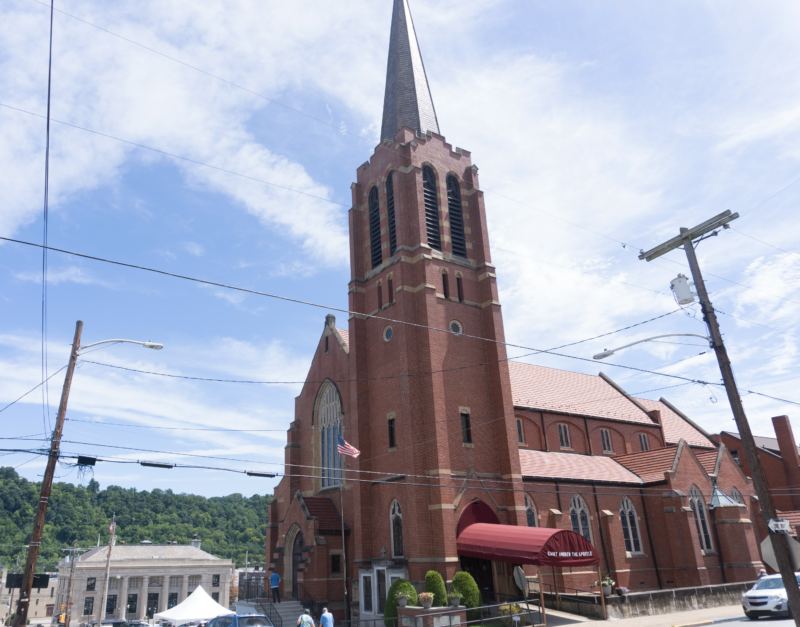 The Festival of Nations took place at Saint Andrew the Apostle Parish at 624 Washington Avenue in Charleroi, Pennsylvania on Saturday, August 13, 2022. Saint Andrew the Apostle Parish is a Roman Catholic church. This was the 33rd instance of this annual event. According to the Facebook event page, “This festival is a celebration of culture and ethnicities, community, and delicious homemade foods.”

Cultures that were represented at the festival’s food booths included Italian, German, Greek, Slovakian, Hawaiian, American, and Mexican. The Hawaiian booth is a new addition that was added this year. Mexican food was available from Mexi Taco, which is a local family-owned restaurant specializing in homemade Mexican food.

Joe and John, of Charleroi, stopped to chat about the festival. They had been attending the Festival of Nations for six years. Joe mentioned that he had tried “a little bit of everything” and that it was all “pretty good.” “It’s the best Mexican food here in town,” John stated about Mexi Taco’s dishes. He highly recommends it.

The parish and Ripepi Winery bottled a souvenir wine to commemorate the 2022 festival. Several booths showcased basket auctions and games of chance, which included the chance to win a family trip to Walt Disney World. A booth with balloon animals was included at no charge to attendees. The festival also included a bakery case called Peggy’s Pastries in honor of Peggy Foster, who passed away on March 18, 2022.

Sales from the event benefit the church. In the past, it’s been reported that the goal is to earn $20,000 during this festival.

DJ Carey Charles was on hand to entertain guests. Charles entertained the crowd with a wide variety of music from traditional songs to party music by artists including Billy Currington to recent hits by artists such as Lil Nas X.

The turnout was excellent. Citizens seemed to enjoy the food and community the event provided.