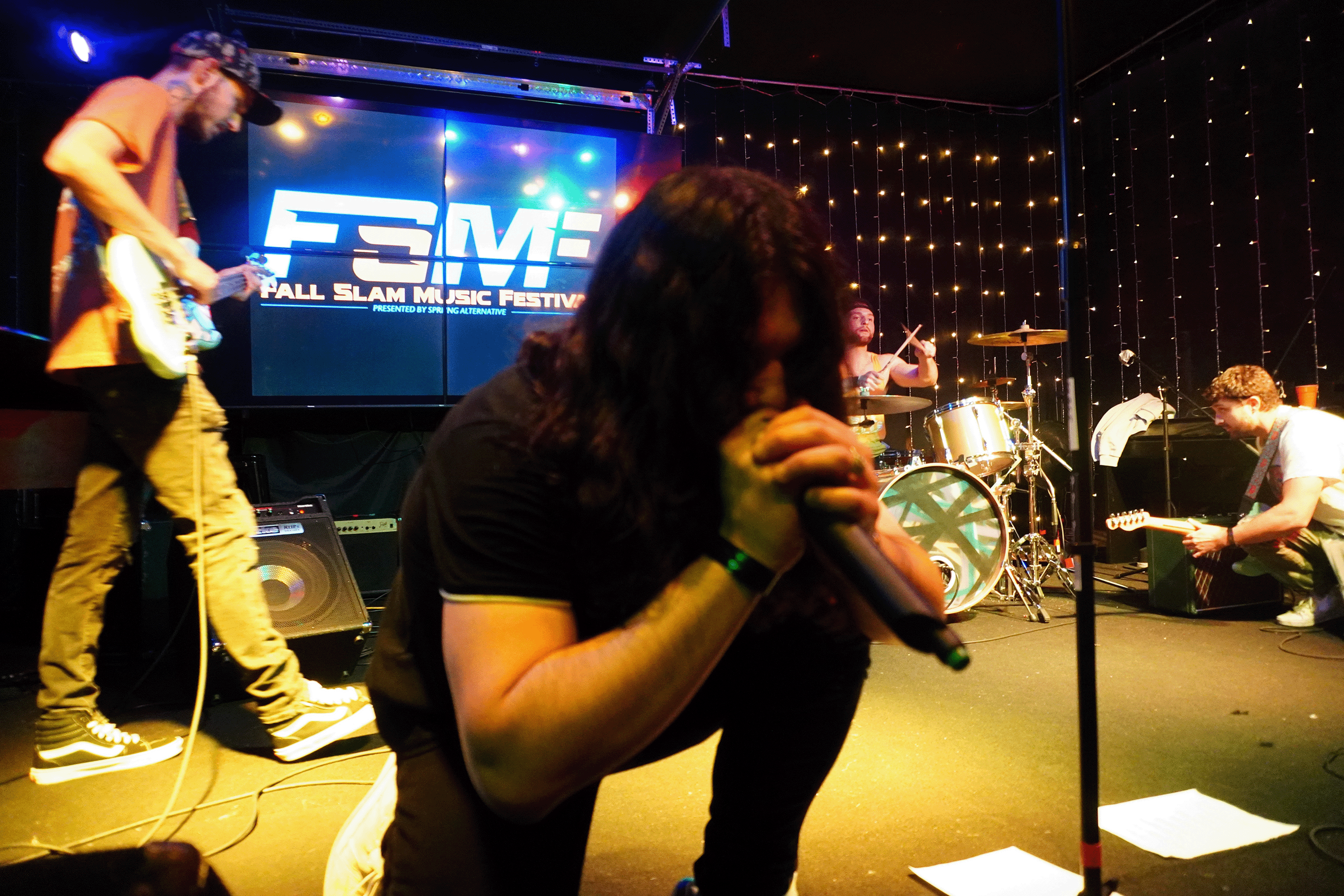 No Sleep For Zombies at the Fall Slam Music Festival at the Forge Urban Winery in Homestead, PA on October 9, 2022 by Sam Hice

Pittsburgh-based band No Sleep For Zombies has been in existence for less than a year. In that time, they have accomplished A LOT. According to the band, they have played at least 25 shows in 2022. Their album Die Alone dropped on January 1, 2023. Can they top themselves in 2023?

Pitt Music Live had the pleasure of interviewing No Sleep For Zombies live at their home base, Chalfant Sound last month. According to the official site, “Chalfant Sound is a Pittsburgh recording studio that was built for all styles of music production.”

No Sleep For Zombies shared their thoughts on collaboration and live show production in Vibe Check: The Art of Collaboration & Creativity. While I had the chance, I asked many other questions to share with you now that the album is out.

No Sleep For Zombies is singer Turnmeuptone, guitarist Timothy Carr, bassist Dan Winter, and drummer Patrick Sites. No Sleep For Zombies got their start when Turnmeuptone talked to his fellow Chalfant Sound audio engineers about playing with him as his backing band for his new album and the Spring Alternative Music Festival. As Timothy Carr puts it, “We pretty much had so much fun doing the rehearsals and everything, we decided to just stay as a band.”

While No Sleep For Zombies is a newer band, they bring together their years of experience as individuals.

Zombies bassist Dan Winter holds a Master of Fine Arts in Fine/Studio Arts from The George Washington University and a Bachelor of Fine Arts in Photography from Point Park University. Winter learned about running a recording studio while completing his Master’s, as mentioned in his extended interview above.

Turnemeuptone told Pitt Music Live that he has been producing music for the last seven years. Currently, Tone is earning his Bachelor of Arts in Music Production from Berklee Online. Zombies drummer Patrick Sites is also a member of the mellow punk band Foremost.

Patrick Sites sums it up best when he said, “I think we are all just very unique kind of guys and different in our own way,” he continues that “we all bring an energy to the table that is unmatched.”

The band’s current sound is in the pop-punk area. Individual band members have a wide range of musical influences that they bring to their sound including Bijou, Malaa, The Offspring, Blink-182, Sum 41, Led Zeppelin, Jimi Hendrix, Green Day, Still Woozy, Remi Wolf, Jack White, Green Day, Pharrell, The Chainsmokers, Paramore, and The Hotelier. Patrick Sites describes No Sleep For Zombies sound as “feel good music.” In the future, they will be experimenting more in the rock genre.

A helpful piece of advice that Dan Winter shares above is that he’s very big on “prototype over perfection,” he elaborates that “Nothing ever gets made and it’s the final version, off the rip.” He says that you have to “throw yourself in” and “learn as you go”, instead of just studying and never starting.

No Sleep For Zombies has played and grown a lot in the last year partially due to Tone’s ambitious promotion of the band via Spring Alternative LLC as he describes above.

No Sleep For Zombies’ upcoming plans for 2023 include staying busy playing even more shows this year. After growing in Pittsburgh, they are going to be traveling more this year as well.

In addition to the shows they have shared on the flyer above, they will also travel to New York for the first time. On May 20, 2023, in New York, they will be recording exclusive, custom vinyl singles, which are now available for pre-order. They will be doing a show in New York as well. You can follow No Sleep for Zombies on Instagram and YouTube.

Related Articles You May Enjoy

No Sleep for Allegheny County-covers the Fall Slam Music Festival, which No Sleep For Zombies headlined

What is an “Illegal” Music Show Like?-covers the Spring Alternative Music Fest, organized by Tone, with sound by Dan Winter

Vibe Check: The Art of Collaboration & Creativity-with more on Chimera, includes an interview from Big Rig

Yinzer Made Fashion?-includes several local clothing companies, such as Grapevine Inc., which is a part of Chimera