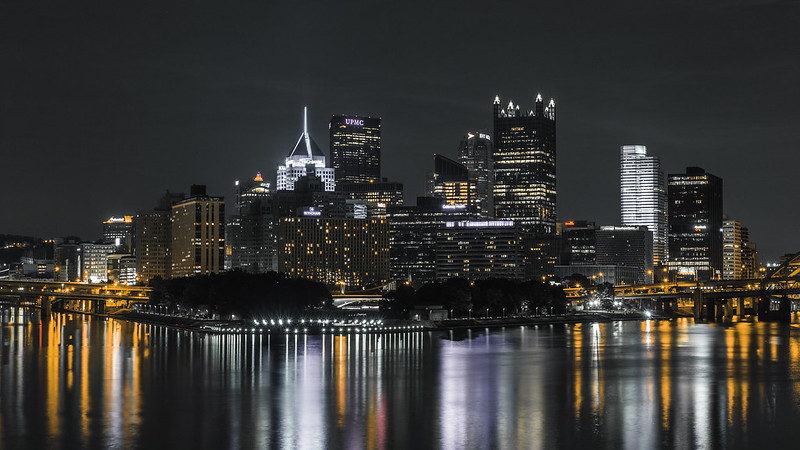 “Pittsburgh from the West” by thederek412, used under Creative Commons

In the last few years, art collectives have been on the rise in Pittsburgh, Pennsylvania. According to Tate, “loosely defined, an art collective is a group of artists working together to achieve a common objective.” The benefits of joining an artist collective include exposing your work to a wider audience, starting important conversations about culture, and working towards a common goal.

Grassroots artist collective Redfishbowl was founded by Chris Boles and Ted Remlinger in 2015. This collective curates diverse events which include mediums such as art, music, and performance. This organization is committed to inclusivity. On October 15, 2022, Redfishbowl artists and multi-media artist John Shook are collaborating on “The Gathering of the FunGuys-The New Occurrence”. Other October Redfishbowl events include four figure drawing classes and four drink and draw events.

This community donates 20% of its sales to a rotating Pittsburgh charity. Schwarz told Visit Pittsburgh that “Wicked Pittsburgh’s identity as an organization is defined by its philanthropic business model,” says Schwarz. “We aren’t here to make money. Quite the contrary. We’re here to give it all away. Then search for more, and give that away.” Creatives who are interested in being a member of Wicked Pittsburgh can submit their work to the official Wicked Pittsburgh email listed on their site. There is a yearly membership fee that allows artists to list their work for sale on Wicked Pittsburgh’s online marketplace.

Redfishbowl and Wicked Pittsburgh have collaborated on events together and helped promote each other’s events.

The Coloured Section Black Artists’ Collective was founded by Natiq Jalil and Crystal Noel Jalil in 2020. This collective’s “goal is to make paths for those artists who are not easily able to enter into creative opportunities through the front door”. The late artist George Gist created the idea and mission of The Coloured Section. Eleven artists are featured on the collective’s site. On July 9, 2022, The Coloured Section ran the Schrodinger’s Monochrome Gallery Opening at the Atithi Studios in Pittsburgh, PA. This was the inaugural exhibition of Atithi Studios. You can purchase art from the collective’s artists from The Shopping Section of their site.

In 2022, the creative house Chimera Effect was established in Pittsburgh, PA. Chimera Effect is a collaboration by Frank Augustine and many other creatives. Services offered by Chimera include photography, videography, studio rental, clothing manufacturing through Grapevine Inc., and music production through Chalfant Sound and Gatekeepers. Chimera Network also produces the Pittsburgh-based rap show “The Vault”. “The Vault” is hosted by the 2019 Mr. Olympia Winner Raymont Edmonds and digital creator Big Rig. On Saturday, June 25, 2022, Chimera hosted a networking event that included performances by several artists including No Sleep for Zombies.

In 2019, Michael Schwarz of Wicked Pittsburgh told the Pittsburgh City Paper that he believed that Pittsburgh was “on the verge of an artistic renaissance.” It seems that renaissance is now here. So many types of artists including photographers, audio engineers, painters, musicians, and many more are now working together to create art and live events all over Pittsburgh.