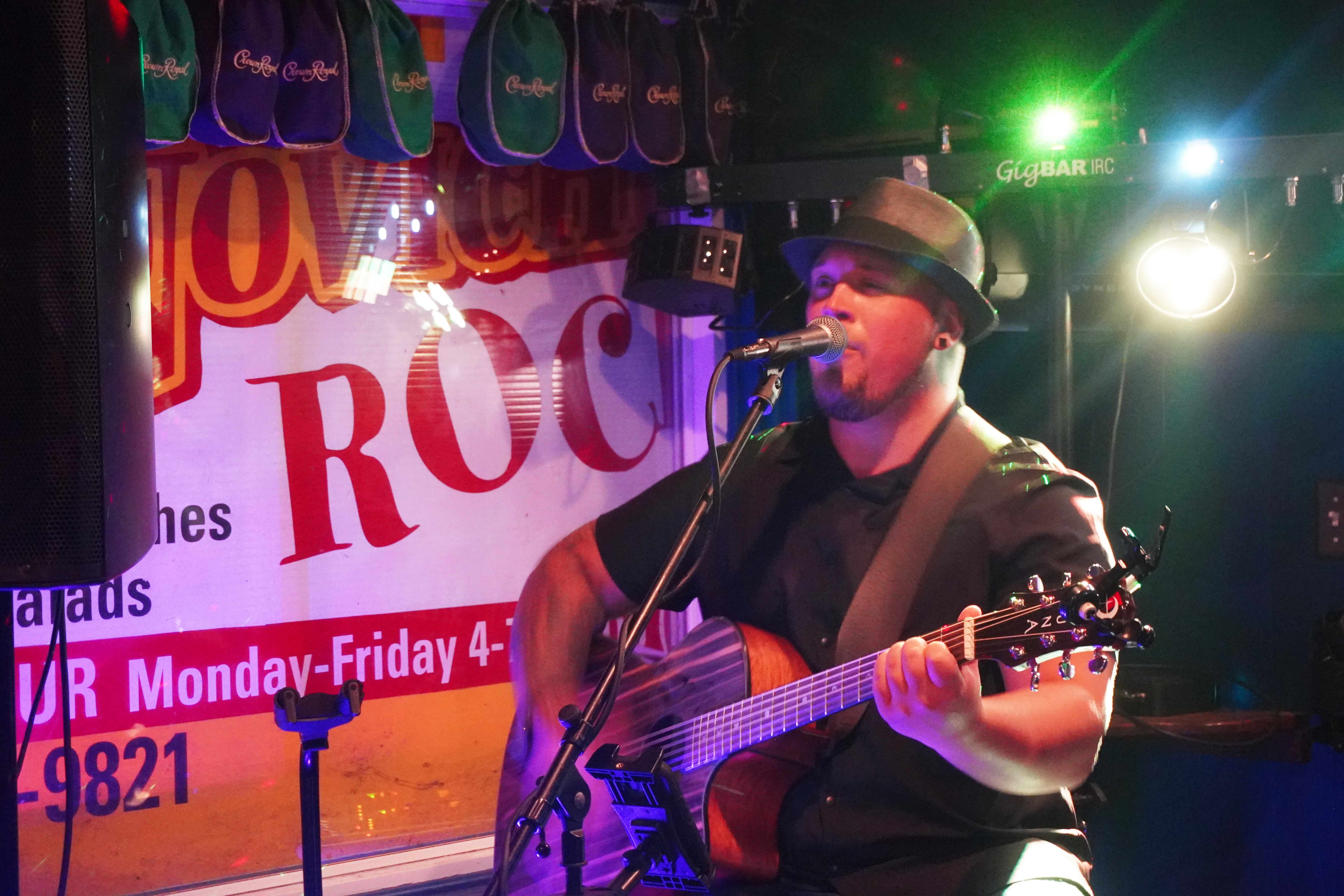 Nick Polito at Novichenk’s in Morgantown, WV on September 17, 2022 by Mary Miracle

Nick Polito played Novichenk’s Tailgaters Pub in Morgantown, West Virginia on Saturday, September 17, 2022. Polito is an acoustic singer/songwriter from Fayette County, Pennsylvania. Nick has been extremely busy this year performing 2-3 times per week in the area.

“I got out of bed last August, and, uh, I quit everything I was doing and decided that I wanted to go chase what I love to do”, Nick explains, “I’ve played music all of my life, uh, but I guess I just never really believed in myself enough to really take that full step.”

Though Nick only took that step last year, he has already been hard at work performing live and putting out his first EP, Looking Back on December 1, 2021.

Polito describes his music as singer songwriter, “I feel that you can put anything to it.” When he opened for Tracy Byrd at the Fayette County Fair on August 6, 2022, they played his songs as rock.

He covers a lot of country music because the audience in Fayette County really loves country, and Nick loves to please his audience. When a patron at Novichenk’s asked for “Take Me Home, Country Roads” by John Denver and inquired if Polito had already played it, he said no, but “Hell, we can do it ten times. Mountaineers, what, they won like 130 to 7?”

During Nick’s Novichenk’s show, he played a wide range of songs including “Cumbersome” by Seven Mary Three, “Feel Like Makin’ Love” by Bad Company, and “Folsom Prison Blues” by Johnny Cash. He also performed his original song “Alone and Stoned” from his EP Looking Back.

“My musical influence was my grandmother.” “She would always push me growing up, as a child, into music. And you know, one thing that she always told me growing up was, don’t ever lose this. Because this music, no matter what, to matter when, no matter where, you’re always gonna feel good playing music, so continue it,” he recalls. Martha Polito’s obituary describes her as someone who “loved music, playing the piano and loved being with her family.”

Early in 2022, Nick Polito took a trip to Nashville. Nick is humble about his chances in Nasvhille, “There’s one of myself on every street corner.” It’s good that Nick is realistic as Nashville’s nickname is the “10-year town”, because it often takes long for a writer to become established there.

He was even able to perform at the legendary Blue Bird Café, which shows his determination as it’s common for open mic lines for the Blue Bird to “snake out of the building and around the block.”  Nashville had such a positive impact on, “My hearts in Nashville.” “I’m actually headed back there next month,” “I’ll be there for four days, I’m gonna do some writer’s rounds. We’ll see what happens.” He mentioned that “I’ve considered moving to Nashville all year.”

For now, Nick is looking to expand his performances a bit closer to home. He confided in Pitt Music Live that he would love to play some shows in the Pittsburgh area.

Ben Filak, guitarist for Broom and Assistant Band Director at Belle Vernon Area School District, has some advice for musical artists looking to play gigs in Pittsburgh, “Cast as wide of a net as possible, market yourself well on social media and understand that a “handshake deal” isn’t the same as a confirmation of a booking.”

Whether playing Fayette County, the Pittsburgh scene, or Nashville, making it in music takes discipline, practice, and a love of music, which Polito has in spades