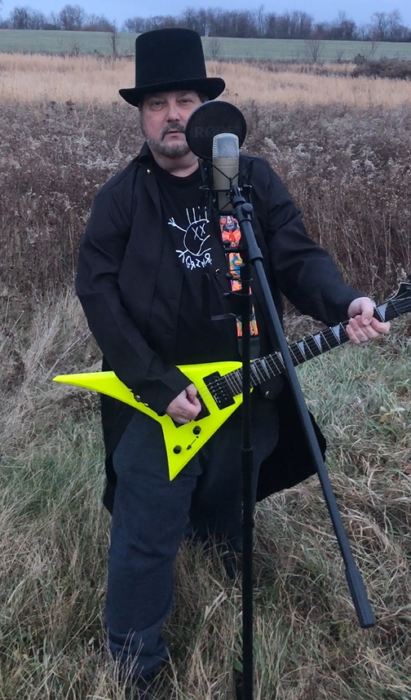 GrimRock is a Pittsburgh based rock musician. GrimRock’s music has been played on radio stations in North America, the UK, and Germany. He was kind enough to share his process with Pitt Music Live and elaborate on his newest tracks and upcoming releases.

Grim isn’t new to the music scene. “I have been making music since the early 90’s. I had a band called Ice Parrot back then and we played for a few years and split up.” He elaborates that, “I took a musical retirement and after being inspired a few years back, got back into making music.”

Grim sometimes wears an eye-catching look. He mentioned that the origin of his makeup, “was actually a Halloween costume I wore at a company party one year. It really made people at that party pretty uneasy when they looked at me. I thought it would be a great idea to bring it back and use it as part of my musical character, Grim.”

Grim often posts bits of his life and what he is working on to his Twitter feed. “Anything can inspire me really. There can be a moment in any part of the day or night that hits me just right. I try to jot down the thought or record on my cell what it is and later when I am home, put the rough idea down so I can either use it or keep it for later.”

“This whole music thing all started with a 45 I found in my dad’s basement from Shadows of Knight called Gloria ’69. It had an overdubbed heavy riff that the 1966 version didn’t have. This was the song responsible for me wanting to be a musician,” Grim mentions on his love of music.

When it comes to his musical influences, Grim says “I could name all of the ‘big’ names in music history but artists like Nick Drake, ELO, Adam & the Ants, Gary Numan, Love & Rockets, and many more helped shape me and my musical style.”

Grim is busy creating new music. “I just released a single song, Everything Is On Fire (09-06-22), along with a brand-new video for the new track (09-10-22). I have plans to put out another EP with the working title of ‘Spreading The Grim’ soon with some extra demo tracks or bonus tracks. I was also featured on an online collaboration with Trench Gun from LA on a track called Broken.”

Grim explained his creative process as, “I start all of my recordings with a basic track, mostly about 1 minute in length, and with a basic main riff and chorus. I do this a lot of times from my acoustic guitar then covert them into the distorted chords and see how it translates. The biggest example of this is GrimRock Radio. The main riff was an acoustic riff and was supposed to be a throw away track and ended up being what was used on that track, but electrified. I don’t do lyrics until last and when I do start to place lyrics, I do a hum track. I make hum noises in the lengths and inflections I think will fit and then come up with words.”

If you are new listener to GrimRock’s music, he recommends that you start by listening to “Everything Is On Fire” and “City”. When asked what his dream venue to play is, Grim states “If I had to pick anywhere in the world, O2 Arena in London would be super cool.”

If you are interested in working with Grim in the future, take note that he is “always looking to collaborate on music and am currently looking to be an opening act in the area.”