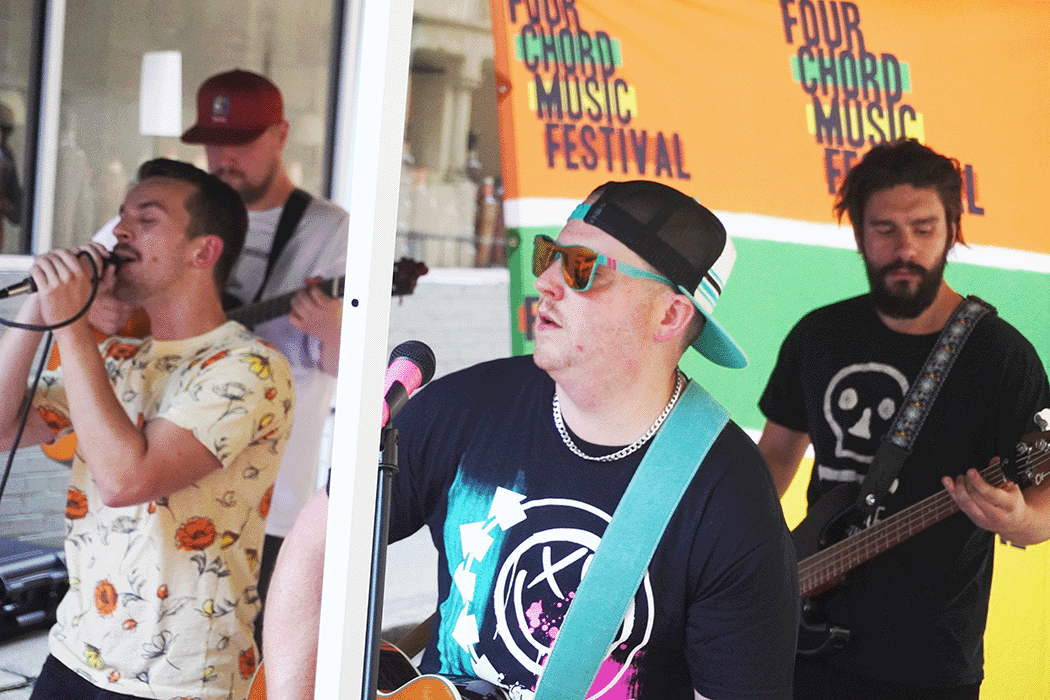 Old Neon on August 27, 2022 at the Four Chord Pop Up in Pittsburgh, PA, by Mary Miracle

Old Neon describes their band’s music as “indie rock with emo and pop punk sensibilities.” Old Neon as been hard at work this summer. Old Neon is Drew Sipos, Mike McInnes, Michael Fortnite, Christopher Homa, and Zach Pollack (who was not performing that day).

Since the Millvale Music Festival in May, they have released four new singles, “Today is Screaming Your Name”, “Just Friends”, “Barely Alive”, and “Natalie.” “Natalie” was released the night before the pop-up.

The Four Chord Music Festival Pre-Fest Pop Up offered a unique opportunity for Old Neon’s fans to hear them do a live acoustic set. Old Neon performed many of their songs including “Natalie”, “Just Friends”, and “I Won’t Stay.” They also covered emo hits from bands including Fallout Boy and Dashboard Confessional.

In addition to performing, Old Neon also ran the sound for the event and performed ticket giveaways. At one point, the sound equipment went out, but the band rolled with it, moved out into the crowd, and continued the show with one guitar and a tambourine. “I’m trying to launch the space shuttle here”, Mike McInnes joked as he worked to get everything back up and running. Old Neon was able to get the equipment working and get back to the stage to finish their set.

Michael Fortnite and Drew Sipos of Old Neon on August 27, 2022 at the Four Chord Pop Up in Pittsburgh, PA, by Mary Miracle

This exciting event also included performances by The Middle Room and Look Out Loretta, live art by Patrick McCafferty, and the opportunity to buy merchandise from and discounted tickets to the Four Chord Music Festival.

For more on Old Neon, you can listen to them on Spotify and Bandcamp. You can also follow them on social media on Instagram, Facebook, and Twitter. Upcoming Old Neon shows include appearances at the Voodoo Brewing Company on September 3rd, Local 724 on September 14th, and Crafthouse Stage & Grill on November 14th.

For more on the Four Chord Music Festival, you can visit their website. For locally inspired fashion, you can check out the show’s co-sponsor Steel City.