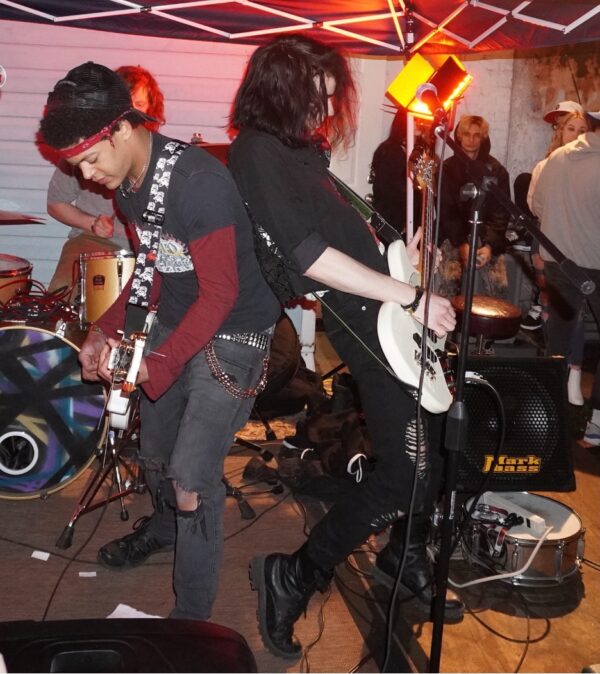 I had been considering attending this festival as it was comprised of all Pittsburgh artists when I was offered two free media passes. Thanks to the Spring Alternative Music Fest, the Illegal Flagship Store, and everyone involved, I was able to cover this show.

We showed up a few minutes after the official start time and were told that things were running a little late. It’s been my experience that most shows I’ve been to don’t start on time so that was cool with me.

Upstairs, the Let’s Be Blunt Podcast was being recorded. Out back, the audience had started trickling in. The event space at the Illegal Flagship Store was set up behind the store. There was a tent with audio equipment for artists behind the store to perform. Chalfant Sound was on hand, assisting artists with their performances when needed. There was also a wooden platform provided so that when the crowd filled out, those in the back would still be able to see the show well.

This show felt like the before times in the best possible way. The event had the ambiance of a house party. The audience included a lot of the artists who would later perform, especially early on. Some were even performing for the first time. The event was BYOB, so the crowd brought their own drinks or food with them. The fest provided free bottled water to the audience to stay hydrated.

Local comedian Jeff Fieldhouse hosted the show. He did a small set before the musicians started their shows. He also kept things moving between artists or when there was a bit of a wait.

I asked Jeff Fieldhouse how he prepares differently when he is hosting an event like this versus when he performs a traditional stand-up set. Jeff replied that “yes hosting a music set is way different than a normal comedy set. I’ve hosted a good bit of music events and it took me awhile to realize it’s less about the “jokes” and more about being a host/keeping the ship moving!”

In reference to the Spring Alternative Music Fest, he said “For example this most recent event I had an outline of what I needed to bring up each time on stage & then had a few jokes to keep the time moving. I really like the contrast between the two because hosting music events feels like I’m working out a different creative muscle!”

Fieldhouse’s comedy was not safe. There were times that he got raunchy or went to the edge with a joke. I personally believe it’s good to go to your edge in comedy, yoga, or life. He also interacted with the audience well.

Bri Dominique sang songs that started with a bit of a 90s bent and then flowed into more of a 60s style. She played the violin beautifully and has some memorable lyrics. Bri Dominique’s “Music for the Kind Hearted” will be released on May 16th. She will be performing a modular set at The Andy Warhol Museum on July 9th.

Max Machino ingratiated himself to the crowd by passing out Fireball Party Starters before his performance. Machino’s music put me in mind of Lupe Fiasco. His vocals have power and meaning, but with a mellow dreamy quality to the music. Max Machino’s video for “Needed This To Cope” is on YouTube. You can listen Machino’s album Enter The Void on Spotify.

If you dig instrumental music, you will love Anton Ego. They mentioned they were missing their bassist due to a school commitment, but you wouldn’t notice this as they were quite skilled.

I have a good life, but for a moment, I temporarily wondered if every decision I’d ever made was wrong, because I don’t think I’ve ever been as happy as this man, right here. Drummer James Ritter of Anton Ego expressed a kind of pure joy that I’ve rarely seen in anyone, not just musicians.

I was not familiar with all the artists who were going to be at this show before I arrived. I did mild research. I was looking forward to some surprises. Lo and behold, comes Christian Laneve.

Earlier in the evening, Jeff Fieldhouse complimented Laneve and his crew on their fashion sense. He inferred that one of them must be performing. I had no idea which one it would be.

My photographer Sam came back to find a stunned look on my face at the sheer deftness of this upcoming rapper. Christian Laneve blew me away. He’s fast. His lyrics are relatable. He has it.

After his set, he was taking photos with his crew. Members of the crowd, who seemingly had also seen him perform for the first time, came up to get photos with him. Laneve immediately attracted a fanbase for himself, including me.

Christian Laneve’s “Tell Me Why” drops on April 27th.

Rapper Moe the Natural was good at engaging what had by now become a large audience for this venue. A videographer filmed his performance and created a music video that you can see on his Instagram.

I was excited to see Understatement live. I’ve been following them on social media for a bit and they seemed like they’d put on a good show. Happily, I was right. They had style, showmanship, and good music.

There was an issue with the mics that started right when they went on. That was a bit of a bummer. It does give me a good reason to see them live again soon.

Understatement had just released their first album Get Away With Murder the previous day.  They had merch for sale at the show. I unfortunately did not get a chance to check it out. Hopefully, I will next time.

I had to peace out after Understatement, so I did not get to see King Catfish, Turnmeuptone, Joziah Council, or Sierra Sellers. The Spring Alternative Music Fest’s Instagram posted some videos of their performances. It looks like it was very busy, and the audience was having a great time.

2 thoughts on “What is an “Illegal” Music Show Like?”