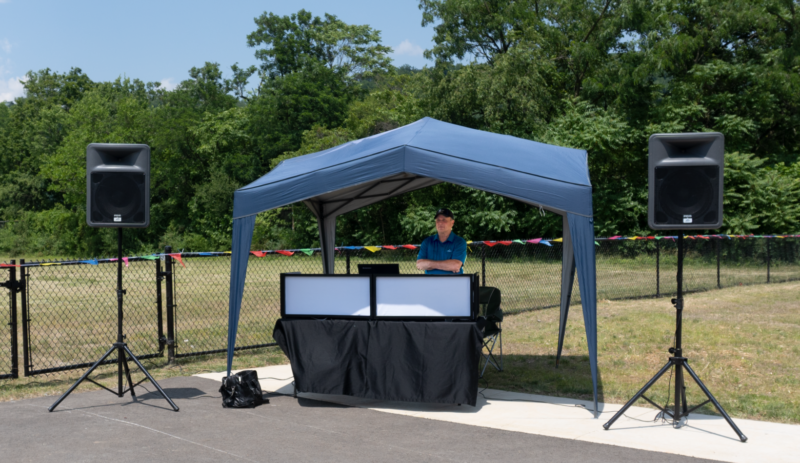 The improvement of the riverfront includes new lighting, curbing, sidewalks, “widening of the existing boat launch ramp, the establishment of a boat trailer parking area, including ADA accessibility for parking and sidewalks, and landscape design”.

The area used for the widened boat launch area and enhanced parking is utilizing what was previously the Charleroi High School’s Cougar Stadium before its demolition in 2018.

The cost of this project was $450,000. This project was funded by a grant from the Pennsylvania Department of Conservation and Natural Resources, the Local Share Account Program, Washington County Tourism, and the Mon Valley Alliance Foundation.

This was a small event. It was held in the afternoon on a weekday, which did not make it an ideal time for Charleroi citizens to attend as they are typically employed in jobs that require them to work during the day. The tables and seating were adequate for those who attended this networking event.

Speeches covered how the Magic City Riverfront Park would revitalize the area due to the recreational activities available, including boating and fishing. Pennsylvania is known for its outdoor recreation. They spoke about making outdoor recreation more accessible with a plan for residents to be able to enjoy the outdoors and reap the health benefits by not having to travel more than 10 minutes from where they live.

There was talk of how the improved boat launch fits in with the recent restaurants that have opened downtown which has also improved the presentation of the borough of Charleroi.

The “Magic City” name was also elaborated on. The story is that beautiful glass shards floating in the air made the town look magical. This is due to the Pyrex glassware factory that has been operating in Charleroi, PA for over 60 years. Another theory on the nickname of “Magic City” is that immediately after the land that is now Charleroi was sold, the development of the area was so quick that it happened like magic.

After the speeches, there was a ribbon-cutting to commemorate the event. Attendees were then encouraged to network and get something to eat. Food was provided by Vagabond Taco Truck. This unique local food truck has a Breaking Bad theme.

Bottled water was also provided to try to combat the heat. Travel-size bottles of suntan lotion were placed on the tables to provide sun protection for attendees.

Phase Two is in the works for Magic City Riverfront Park. Charleroi Borough Manager and COO, Matthew Staniszewski mentioned on Facebook that they are looking for volunteers for the next phase.