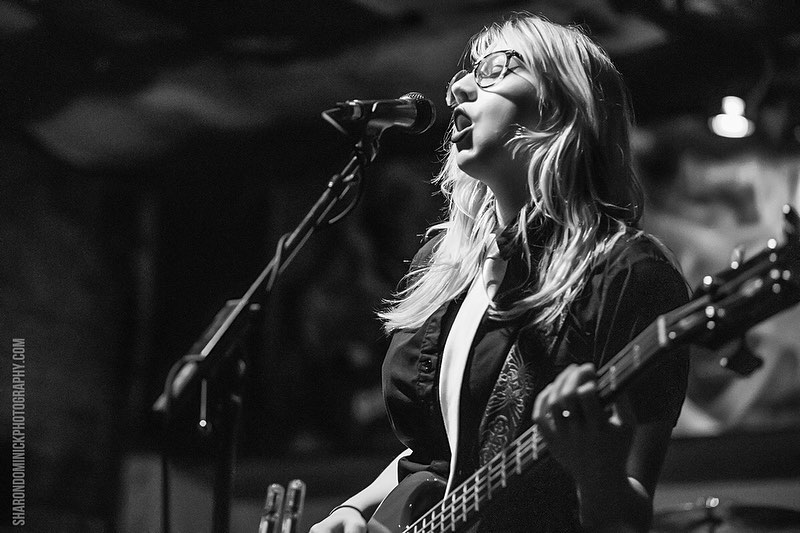 Maleena’s new six-track EP Diary of a Music School Drop Out was released on May 15, 2022. She was kind enough to answer a few questions for Pitt Music Live.

Maleena Dominick started songwriting at four years old. Her first instrument was a recorder in third grade. She excelled so quickly that the school had to add new levels. That’s when she knew that she wanted to be a musician.

In 2015, Maleena’s father Chip Dominick formed Chip & the Charge Ups.  While Chip had not originally planned for Maleena to be in the band when other bass players didn’t measure up, Maleena sat in on the band’s first show. Chip Dominick has stated that “she did so amazingly well at that first show, we knew she wasn’t a fill-in: she was meant to be in the band!” Chip has described Maleena as the “special sauce” of Chip & the Charge Ups, “the overall vibe we bring to the stage just blends in a magical way unlike anything I’ve ever experienced.”, he told the Post Gazette in 2019. In 2020, Maleena told Build the Scene “I am the executive vice president of visual branding for the band.” She explained that she styled the band with matching ties, hair, and the overall color scheme.

Maleena told us that “One of my biggest musical influences in many aspects of my music is Butch Walker. I really appreciate his diversity in his music, going from releasing pop punk albums to having indie singer songwriter type music. His lyrics also inspire me to try to write as openly and honestly as I can in my own music”.

Maleena’s first EP Bruises to Prove It was released on July 31, 2020. The album was released the same summer that Maleena graduated from Moon Area High School.

In the fall of 2020, Maleena started studying music tech at Duquesne University. Maleena shared with us that “I came up with the title Diary Of A Music School Drop Out after dropping out of college. I wanted the EP to be a collection of emotions over my year and a half that I spent in music school.” Maleena further explained, “I dropped out of music school this past January, after 3 semesters of struggling. I was very depressed in college, and studying music took away all of my love for writing music. All of the songs on this EP are about emotions that I had during the time I was in school.”

Maleena stated that if you are a new listener, then two songs she recommends that you listen to first are “Crash” from Diary of a Music School Drop Out and “Homesick” from Bruises To Prove It. “Homesick is one of my most long standing songs off of Bruises to Prove It. I wrote it while I was in high school, wondering if I will find where I belong when I went to college. Yet, throughout college, the song became even more relatable to me about wondering if I even belong anywhere.”

Maleena discussed with Pitt Music Live how her writing process has changed since her first album, “My writing process started in 2018, when I began writing songs for Bruises to Prove It. I had decided then that I wanted to make an album, and I set a 2 year plan for myself. I sat down every Monday night after school and wrote a new song within one or two weeks. I wrote about 20 songs to possibly be on the EP, and decided to go with 6 of them to have recorded at Innovation Studios. I released that EP in July of 2020, and started attending school in August of 2020. During the time that I was in school, I only wrote one song (which is “Our Story”, off of Diary of a Music School Drop Out). Being in music school drained me of my excitement for writing and recording music. When school got out for winter break in December of 2021, I finally got motivated again to start writing. So I decided to sit down and write a song any time inspiration struck me.”

In 2020, Maleena told Build the Scene, that she knew that “If I want to be a musician, I have to make it happen, I can’t just wait around for someone to say do you want to come write some music or whatever.”

Maleena told us that “The processes for both EPs were very different. Bruises to Prove It was a very big and long term project for me. I started a plan for this EP in 2018. I wrote 20+ songs to be considered for this EP. I also had this album professionally recorded at Innovation Studios. I released the EP in 2020.”

“Diary of a Music School Drop Out was very different. I decided in November of 2021 that I wanted to put out a punk album. I didn’t waste any time. I wrote the songs as inspiration struck me, and wanted to capture all of my pent up emotions that I had towards school. I recorded all of the songs myself, as well as mixing them myself. I released the EP in May 2022.”, she elaborated.

Maleena’s writing style has changed since her first EP. She mentioned that “I started writing songs back when I was 15 years old. I started writing my music with just me and an acoustic guitar, and so that is how my style developed for Bruises to Prove It. I have always been a fan of rock and punk music, but was never able to write music in that style. In 2021, I started performing my music live with a band, and started covering some of my favorite songs. When I performed these covers, I realized that I wanted to make punk rock music, and that it was now a very real possibility for me to be able to do so. So, that is just what I did. I played all the instruments on my 2nd album and I programmed the drums myself.”

Maleena let us in on the story behind the songs on Diary of a Music School Drop Out.

The album starts with “Burn It Down”. “This track is about turning your anger about school into ammunition. I talk about how I feel that school tells you that you can be anything you want to be with a degree. But I feel that I can accomplish much more by my own passion.” Maleena reveals.

Regarding “Crash”, she says that “This song is about crashing your car and looking for deeper meaning in that situation. It is also a hardcore punk song, so naturally there are also lyrics about despising capitalism and eating fascists.” Maleena mentioned that “Crash” is one of my most interesting songs that I have written. I feel that it has a lot of shock value to it, especially considering all the music I released prior to Diary of a Music School Drop Out was all very calm and sad music. This song catches people off guard and I love sharing this side of myself.”

She elaborated on “Do I Even Make A Difference”, “This song is about the social aspect of my time at college. I met so many people, but never felt that I had friends. I felt that no matter how hard I tried, no one ever cared for me. It is about questioning whether your presence is even noticed or appreciated.” This is a very relatable song as loneliness is unfortunately something that a lot of college students struggle with.

On “Sold My Soul”, She says “This track is another one that is about my anger directed toward school, and how I feel that school is a scam. I felt that college is just for the school to steal everything you have with the false promise of success.”

The track “Our Story” “is a song I wrote for my family. I am very close with my family and treasure our memories together, and wanted to write a song for them to show them how grateful I am that they were there for me through my darkest times.” Maleena mentions.

The song “Dear Diary” “is one I started writing when I was 16 years old. I wrote the line “I don’t wanna know what happens to me down the road but I don’t really have a say how everything goes,” and other lines back then and I just continued to add on to the song all the way up into 2022 when I wrote the final line of the EP “now I sit and sing in peace because it’s become clear to me that I am in control of all that I see” reflecting on my growth as a person in feeling able to be in control of my life after dropping out of school.” Maleena recounts.

This journalist recommends that you listen to Maleena’s new album and catch her live if possible. Who knows? You may even be able to perform with her. Maleena told us “I am also looking for more musicians to work with in the performance aspect, and can also be reached through my Instagram if any of the readers would be interested in possibly performing with me.”

Our top tracks from Diary of a Music School Drop Out are “Burn It Down” and “Crash”, which really capture that punk flow that Maleena does so well.

You can listen to Diary of a Music School Dropout on Spotify, Apple Music, iTunes, Amazon, or Pandora. You can follow Maleena on Instagram and TikTok. Maleena mentioned that she is “always performing around the Pittsburgh area, so if anyone is interested in coming to any shows, I will be posting about them on my Instagram.

If a show requires tickets, they will go up for sale with a link through the official Chip & The Charge Ups website.

Note: This interview has been edited for clarity and flow.