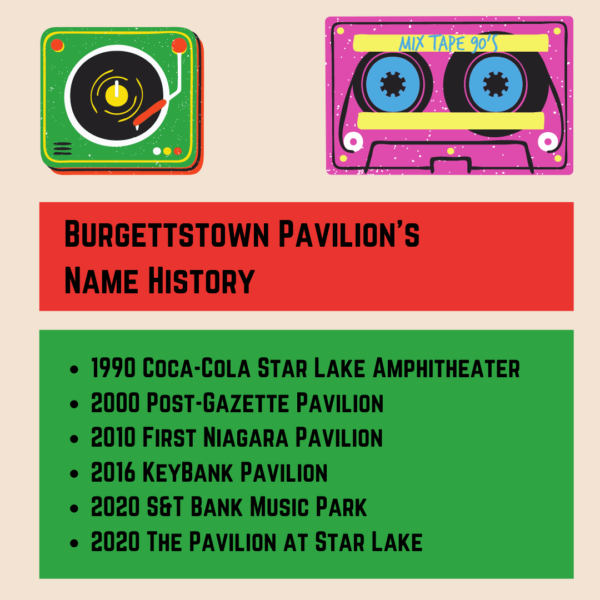 The Pavilion at Star Lake in Burgettstown, Pennsylvania hosts many headlining bands every summer. You may still call it by one of its many past names, which include S&T Bank Music Park, the KeyBank Pavilion, the First Niagara Pavilion, the Post-Gazette Pavilion or the Coca-Cola Star Lake Amphitheater.

This year, concert season at Star Lake opens with the Brad Paisley: World Tour 2022 on Thursday, June 2, 2022.  The 2022 season was originally supposed to start with the Foo Fighters on Saturday, May 14, 2022. However, the Foo Fighters understandably canceled all remaining tour dates for 2022 after the tragic death of their drummer Taylor Hawkins in March of 2022.

Let’s look back to the beginning of this well-known concert venue in anticipation of the new concert season starting next month. The Pavilion at Star Lake is a large event space, which accommodates up to 23,000 guests. The current owner of the Pavilion at Star Lake is Live Nation. Live Nation Touring, Inc. was previously known as SFX Touring, Inc. according to the company’s business entity details.

The first show at the Coca-Cola Star Lake Amphitheater was Billy Joel on June 17, 1990. Anyone who has been to a show at this venue in Burgettstown is familiar with the horrid traffic conditions. Opening day was no different. The sold-out Billy Joel performance was plagued with poor traffic and parking conditions, which left many on the highway up to 8 miles away and missing the entire performance.

In 1997, SFX purchased the Star lake Amphitheater and PACE. Over the years, many notable bands have performed at this amphitheater. Metallica played a well-received set on August 12, 1994, during their “Summer Shit” tour with openers Fight, Suicidal Tendencies, and Candlebox. On July 31, 1995, Courtney Love rushed off the stage while performing in Lollapalooza after an audience member threw shotgun shells on the stage following the death of Love’s husband Kurt Cobain.

Phish played a show in 1998 that was so popular that it was released on DVD in 2012, 14 years later. Former President George W. Bush even held a victory rally with pitcher Curt Schilling at the Post-Gazette Pavilion in November of 2004. This amphitheater has had a long and storied history.

This year’s headliners include the Backstreet Boys, Jimmy Buffett, Morgan Wallen, Willie Nelson, Rob Zombie, Kid Rock, Alice in Chains, Jason Aldean, Wiz Khalifa, and Five Finger Death Punch. It’s most likely that for many years to come, fans will continue to flock to this venue to see big-name shows. The Pavilion at Star Lake or whatever its next name ends up being is a local favorite.

One thought on “The Story of The Pavilion at Star Lake”