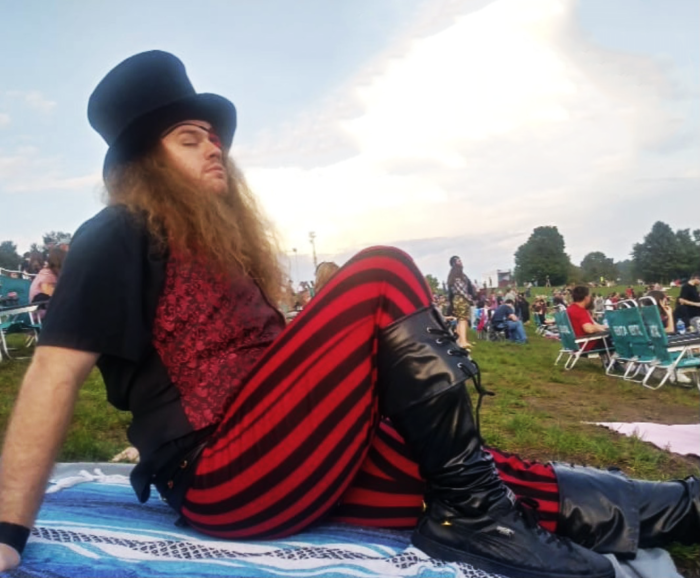 Since the inception of Pitt Music Live in February 2022, designer Sam Hice has been regularly taking photos for this site and the Pitt Music Live Instagram account. He was kind enough to answer a few questions.

A the first show that Pitt Music Live covered, Feeble Little Horse, it quickly became apparent that Sam’s photos would be better because as he puts it, “due to my height, I was able to take much better photos and to get good angles.”

“I would take a million stupid shots of empty rooms and I used to take pictures of just pieces of furniture and stuff, and everyone used to tell me it was a waste of film.” Hice says about his early photography hobby, which started at the age of 5. When his parents got the photos developed, they said to him “oh, it’s our coffee table.”

“I have a Bachelor’s of Science in Graphic Design that I got at California University of Pennsylvania. Go Vulcans” Hice states sarcastically. He graduated in May 2022. “I had a year of graphic design experience at the vocational technical school in Uniontown.” Sam stated regarding design training before his schooling at Cal U.

Sam is also a self-described “sketch artist”, who mentioned he’d like to branch out into records, “I want to make album covers for a little while.”

“I didn’t start seriously drawing until 9th grade, but that was back in 2009, so realistically that would be 14 to 15 years” of drawing experience. In recent years, Hice has taken many drawing, painting, and other art courses during his degree program. His pieces often fall into the realm of fantasy and frequently feature macabre beauties.

“Composing a shot is design. It’s photography. Photography’s a huge part of design.” Sam states. He has been taking photos and creating videos regularly for the last few years while creating campaigns. Unlike his early experimental photography, this was out of necessity. “All my design classes encouraged that you take your own photography, whenever you could, because it’s really hard to find a good stock photo.” Hice said.

He was also impressed by the theatrics, “The guy from Cheap Trick pulled out a 5-neck guitar, which I thought was really neat. It’s also a gimmick, but I really think it’s cool.”

“I always just want to go on the stage and take photos of all the people at concerts, that’s what I’d like to do.” He also mentioned that he would like to take crowd shots. When asked if he’d like to be a tour photographer, Sam replied “that’d be pretty sweet.”

Concert/Tour Photographer Sarah Carmody was also consulted for this piece. “I started realizing this is what I wanted to do in 2010 and I started shooting shows in 2011 and touring in 2016.” Sarah states, regarding her over 10 years of experience as a photographer. Recently, Sarah toured with the band VRSTY on the 10 Years run.

Sarah Carmody mentioned that “As long as I can remember I’ve had a camera in hand. When I was younger it was the throw away ones you got developed at Walmart or my 35mm film camera.”  It seems that those drawn to photography become interested in it at a young age.

“It honestly takes a lot of networking and being quick at what you do because bands need it fast! My best advice would be don’t burn bridges this industry is so small. Also learn lighting for photos because bands need more than just someone who can shoot shows. Never stop pushing yourself and be quick with your work.” was the advice given by photographer Sarah Carmody.

Sam Hice also mentioned that he wishes he could have photographed the late David Murray Brockie, Gwar’s “Oderus Urungus”, instead of just photos and videos on his “shitty cell phone.” He said he’d love to tour with Gwar or Psychostick.

“My gut reaction is Liquid Death. I’d really like to work for Liquid Death,” Hice mentions as a graphic design aspiration.

Sam Hice is a freelance graphic designer who resides in the Pittsburgh area. His design portfolio can be found at samhice.com. Sam can be contacted through his Instagram.

Sarah Carmody is a concert/tour photographer and videographer. You can view her work on her website and her Instagram.

Note: These interviews were edited for content, clarity, and length.