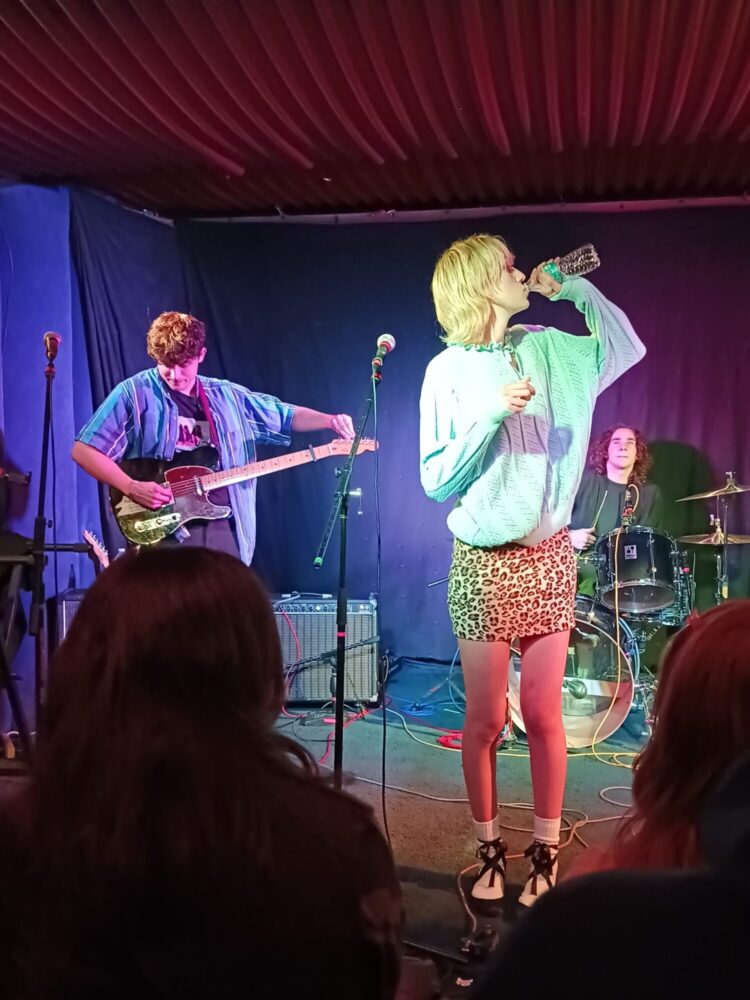 The energy among the ticket holders waiting in line to enter the show was palpable.

One concertgoer mused, “Some of these people are fans, but some, they don’t care. They just want to get out and hear some music”.

This sentiment was later echoed by Alec Ebeling of Merce Lemon who told the crowd, “I hope that you are enjoying the show and that those of you in the back just getting drunk on a Friday night can hear us.”

Feeble Little Horse held a tape release party for Modern Tourism at The Funhouse at Mr. Smalls in Millvale, Pennsylvania on Friday, March 11, 2022. The openers for Feeble Little Horse were Merce Lemon and Gaadge. Those lucky enough to attend the show were able to buy a copy of the cassette rerelease directly from the band.

This was awesome, as the album is now sold out on Bandcamp. During the pandemic, musicians have been heavily affected. They could no longer tour. For many bands, touring and the merch table at shows is a key way to generate income and increase their following. Releasing an album as a small band within the last couple of years must have been rough.

In addition to offering Modern Tourism digitally, they also produced it as a clear cassette tape with holographic labels via Crafted Sounds. This version of Modern Tourism also includes 5 bonus tracks. According to Ryan Walchonski of Feeble Little Horse, band member Lydia Slocum designed the cover, “She made it herself. She’s a really good artist.”

In the last few years in the music industry, we have been seeing artists get creative about their merch. The rise of cassette tapes as a niche item has been growing. When asked, “Do many people have a way of playing tapes or are they more of a décor item?”, Merce Lemon, replied “Yeah, I mean, they come with a digital download”.

Cassette tapes are cheaper to produce than vinyl. This makes them a great item for smaller bands to offer as a physical product to sell, instead of only having a digital copy for sale. Combining a rerelease with a cassette tape seems like a great way for bands to get their music out there to a new audience. All three bands playing that night had tapes of their albums for sale.

Gaadge went on next. The crowd enjoyed their heavy sound. All three bands seem to get along well. Feeble Little Horse’s Modern Tourism even includes a cover of Gaadge’s Murphy’s Law and Gaadge covering the Feeble Little Horse track tricks.

Soon after Feeble Little Horse took the stage, singer Lydia Slocum told the crowd, “Don’t feel pressured, but you can feel free to mosh”, and a good chunk of the audience did for several of their particularly high energy songs.

Feeble Little Horse played tracks from both of their albums, Hayday and Modern Tourism. In particular, the tracks “Chores” and “Modern Tourism” seemed to be crowd favorites.

One can see how Feeble Little Horse has gained enough popularity to be touring New York later this month after having only formed a year ago. Their unique alt-punk sound, stage presence, and affability to their audience have all of the makings of the it factor. Overall, the crowd had an excellent time supporting Pittsburgh musicians who are finding traction further from home.

You can hear music from Feeble Little Horse on Bandcamp.

Upcoming show dates for Feeble Little Horse include The Bundy Museum of History & Art in Binghamton, New York on March 18th, The Living Gallery in Brooklyn, New York on March 19th, and a show at the Original 13 Ciderworks in Philadelphia, Pennsylvania on March 20th. You can purchase tickets here.

You can hear music from Merce Lemon on Bandcamp. Merce Lemon has a show coming up at Mr Smalls Funhouse on May 19, 2022.

You can hear music from Gaadge on Bandcamp.